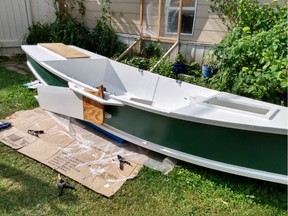 Update: The sailboat was spotted in False Creek Saturday and will be returned to the owners, Vancouver police confirmed.

A Vancouver family’s homemade sailboat — a year-long labour of love — was finally ready to set sail on its maiden voyage in the waters off the Sunshine Coast.

But that plan ran aground early Friday when a boat bandit made off with the DIY vessel.

Duncan McDonald, a shop teacher at Eric Hamber Secondary, got the idea to build a boat from scratch a year ago as a COVID-19 pandemic passion project. His daughters, now age three and six, were on-board.

The McDonalds started work on the project last spring, and after countless hours and a lot of endearing “ridiculous conversations with little girls about sharks and why don’t we just use it to sail to the island,” the 14-foot vessel was ready to hit the water.

On Thursday night, with the help of friends, McDonald hoisted the flat-bottomed skiff onto a boat trailer and parked it in the alley behind their home near Fraser Street and King Edward Avenue, ready for a camping trip to Porpoise Bay.

At around 6:30 a.m. on Friday, McDonald went to take out the trash and saw the boat was gone. A severed lock that chained the trailer to a telephone pole was left behind.

“It was gutting,” said McDonald. “My daughters were devastated.”

The girls had been looking forward to trying their handmade creation out on the water: “They’ve got their life-jackets, they’re full of stories of the things we are going to do.”

McDonald didn’t grow up boating or sailing. But last year, in the thick of COVID, he wanted a project. Sailing, he thought, could be a fun activity they can do together as a family. He ordered a build-a-boat book for beginners online and started watching YouTube tutorials. He ordered wood from Home Depot and scoured construction sites in the neighbourhood for discarded pieces of wood. And he had to learn about sailing, which he’s never done before.

“I had to take a sailing class to justify making a sailboat,” he said. “It’s ridiculous for the attempt, but it actually worked out. I enjoyed the journey. But this was not the expected end of the journey.”

The boat’s mast was made from reclaimed fir from an old house and still has nail holes visible. McDonald also used recycled fir planks and two-by-fours to create a distinctive herringbone pattern on the boat’s bulkhead.

The boat even has a name, even though it wasn’t painted on the side, christened by his kids as Salor Do Dat. “Salor” because it was close to “sailor” and “Do Dat” because it was named by a 2 1/2-year-old. Asked how it was spelled, McDonald laughed: “Your guess is as good as mine.”

His wife Julie was responsible for some of the design elements on Salor, including picking out the classic green colour on the hull and providing “a ton” of child care while McDonald worked on the boat.

He pegged the cost of the sailboat at about $2,000, but the sentimental value is priceless, especially for their kids.

“They’ve had so much fun just in its build stage, building forts in it, making beds in it, using it as a giant teeter-totter with one standing on one end and another at the other end, pretending there are sharks in the backyard.”

The older daughter is more upset about the theft, while the younger one, with the optimism of a toddler, is confident the boat will show up. McDonald said he hopes the thief would return the boat. The boat trailer’s licence plate number is WHW 89A.

“If it was dropped in some park, and it was found that would be great,” he said. “If we can just find it, I would be happy.”

More news, fewer ads: Our in-depth journalism is possible thanks to the support of our subscribers. For just $3.50 per week, you can get unlimited, ad-lite access to The Vancouver Sun, The Province, National Post and 13 other Canadian news sites. Support us by subscribing today: The Vancouver Sun | The Province.

Sign up to receive daily headline news from the Vancouver Sun, a division of Postmedia Network Inc.

Thanks for signing up!

A welcome email is on its way. If you don’t see it, please check your junk folder.

The next issue of Vancouver Sun Headline News will soon be in your inbox.

We encountered an issue signing you up. Please try again