A monster great white shark has been spotted swimming near a family of holidaymakers in a heart-stopping clip.

The group were on a boating trip near Cape Cod, Massachusetts, when the beast was seen – sparking fear among beach-goers.

A family-of-five rented a fishing boat to catch lobsters when they clocked the 15ft shark beneath the boat.

It was just below the water’s surface footage as the footage by the boat charter firm posted on Facebook showed.

A passenger on the boat is astonished by the size of the giant fish and his amazement is heard on the clip which was posted on Billingsgate Charters ‘ page.

On the video clip, he says: “Holy smokes, that thing is huge, dude! That’s like 15 feet! That thing is enormous.”

David Stamatis, who owns boating company, Billingsgate Charters told Boston.com he steered the vessel closer to the shark give to allow the family a better look.

“They were thrilled, it made their trip. Not only did they catch a bunch of fish and lobster for dinner — this was an unbelievable bonus,” Stamatis said.

Stamatis revealed it was seen in Cape Cod Bay in around 60ft of water.

He said: “This is a majestic, beautiful, massive animal and to see it up close like that, for those folks it’s a once in a lifetime event.”

But the New York Post reports how he reckons the shark may have enjoyed the reactions of humans.

He added: “Whether you like them or not, you have to respect them,” he said. “You could be the next check off his meal list.”

The Mirror told of another great white shark sighting at the start of this month.

On that occasion the shark was filmed eating a seal near a packed beach as the sea turned red with blood.

It marked the first sighting of the summer season in New England, US, with officials warning beachgoers to be careful.

The footage was captured by Will Little on a boat near Great Point Lighthouse in Nantucket, Massachusetts, on Sunday.

The shark can be seen thrashing around in the water as people behind the camera urge the seal to escape, shouting: “Go! Swim!”

But as the large predator strikes, one person says: “Oh god, you can see the blood!”

Blood can be seen filling the water, just a couple of hundred yards from the beach in the background of the video.

The clip was initially posted online by local news outlet Nantucket Current before being retweeted on Monday by the Atlantic White Shark Conservancy.

The AWSC tweet adds: “As the summer season approaches, remember to report your white shark sightings to the app Sharktivity!”

Crowdsourcing these “critical data points” helps to reduce encounters and promote safety, according to the organisation. 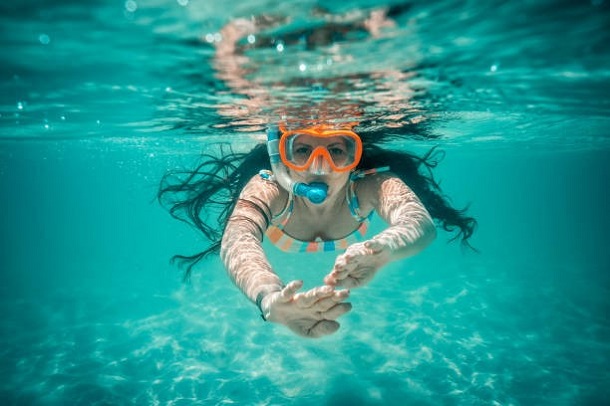