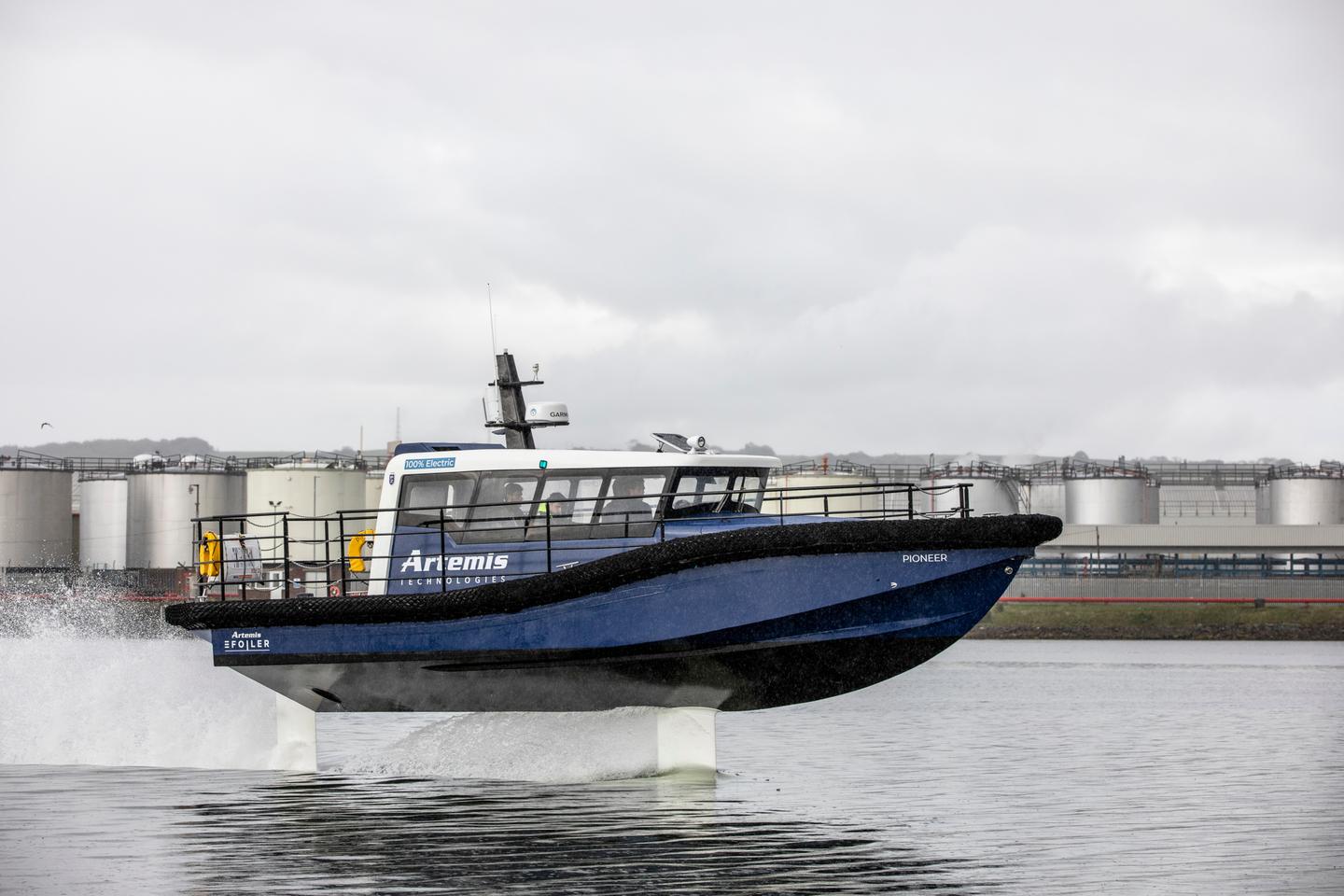 Artemis Technologies out of Belfast, Northern Ireland, has launched what is claimed to be the world’s first commercially viable all-electric foiling workboat, which cuts through the water with minimal wake at up to 34 knots and offers a per-charge cruising range of up to 60 nautical miles.

The launch announcement by the spin out from the Artemis Racing team that was founded in 2018 by Olympic sailing champion and America’s Cup veteran, Dr. Iain Percy OBE, follows sea trials of an 11.5-m (37.7-ft) prototype workboat named Pioneer of Belfast.

The multi-purpose production version is built around a proprietary eFoiler propulsion system that sees the vessel rise above the waves on twin T-foils at up to 34 knots (39 mph, 63 km/h), and can manage 60 nautical miles (111 km) at a 25-knot (28 mph, 46 km/h) cruise. Bow and stern thrusters also allow for low-speed maneuverability, and the company states that the battery pack can be recharged in less than an hour for quick turnaround times.

“Combining our experience from the worlds of high-performance sailing, motorsports and advanced manufacturing, the electric propulsion system that we’ve designed and developed is an absolute game changer for the industry in terms of range, costs savings and minimal wake created,” said Dr. Percy. The company reckons that operators can look forward to up to 90 percent savings in energy costs compared to combustion-engine workboats.

The foiling workboat is constructed using lightweight glass and carbon fiber composites, has a 4-m (13-ft) beam and 2.2-m (7.2-ft) draft, and can accommodate two crew members and six passengers in a flexible seating layout.

The Artemis Technologies’ workboat range is currently made up of two models: the 11.5-m multi-purpose workboat detailed above and a 12-m (39.3-ft) crew transfer craft. The latter has a top speed of 32 knots (36 mph, 59 km/h) and a cruising range at 25 knots of 50 nautical miles (92.6 km). It can carry 12 passengers and two crew. A larger craft for crew transfer operations is also in the works.

No pricing has been revealed but the first deliveries to customers are expected in 2023. The video below shows the prototype in action on the Belfast Lough.