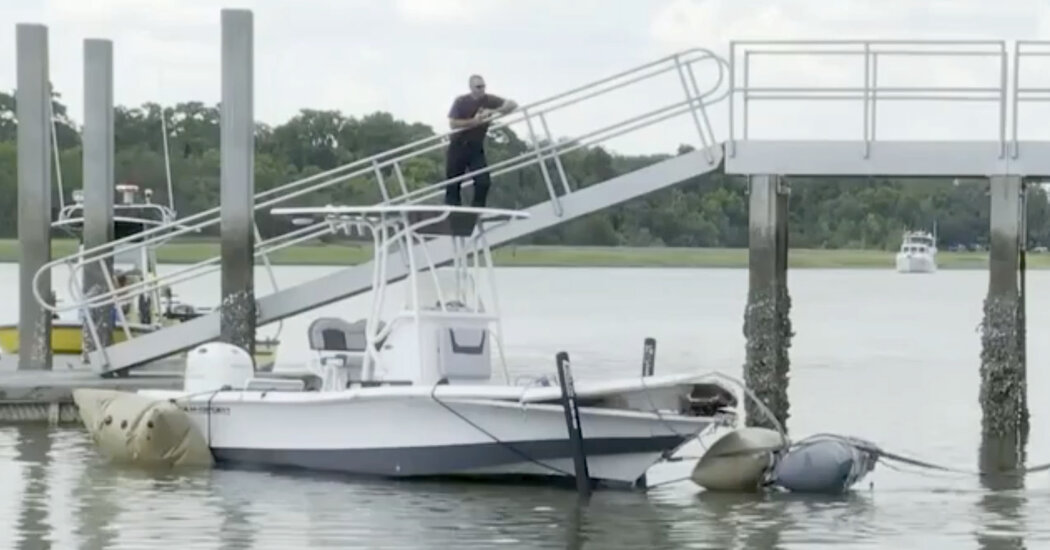 Four other people were hospitalized. One of them was charged with driving a boat while under the influence, the authorities said.

Five people, including four from the same family, died in a boating collision on Saturday along a river popular with boaters outside Savannah, Ga., the authorities said.

Four other people were injured, among them Mark Christopher Stegall, who was charged with operating a boat while under the influence and booked into the Chatham County Jail, said Mark McKinnon, a spokesman for the Georgia Department of Natural Resources.

Mr. Stegall was one of two people who were released from a hospital. Mr. McKinnon said he did not know the conditions of the other two injured people.

Those injured were taken to Memorial Health University Medical Center in Savannah. A hospital spokeswoman declined to comment on the patients’ conditions. The U.S. Coast Guard and local emergency medical services said at least one person was in good condition.

The authorities were alerted around 10:30 a.m., the natural resources department said. The collision happened just north of a marina in Thunderbolt, Ga., southeast of Savannah, on the Wilmington River, a popular destination for boaters.

Two people were pronounced dead at the scene. Divers recovered the three other victims on Sunday morning in water about 14 feet deep, the department said.

In a statement, Calvary Day School in Savannah identified Chris Leffler as a faculty member. The school said Lori Leffler was his wife, and Zachary and Nathan were their sons.

The school described Chris Leffler as “an outstanding” teacher and coach. Nathan Leffler was a senior at the school, the statement said.

Six people were in one boat and three in another, the authorities said. Each boat was a center console boat, a medium-size vessel designed for fishing and day cruising.

Witnesses told officials that the boats were traveling in opposite directions when they collided, the department said. The speed of the boats at the time of the collision was unclear.

When the authorities arrived, some of the victims had already been rescued by other boaters and some were still in the water, said Phil Koster, the chief operations officer of Chatham County Emergency Services.

One boat was badly damaged and the other boat sank, Mr. Koster said. Mr. McKinnon said the authorities had impounded both boats.

Previous post How to Drive a Boat for Wake Sports – Boating
Next post Freedom Boat Club owner shares her most important boating tip: ‘Be a sober skipper’ – WJXT News4JAX